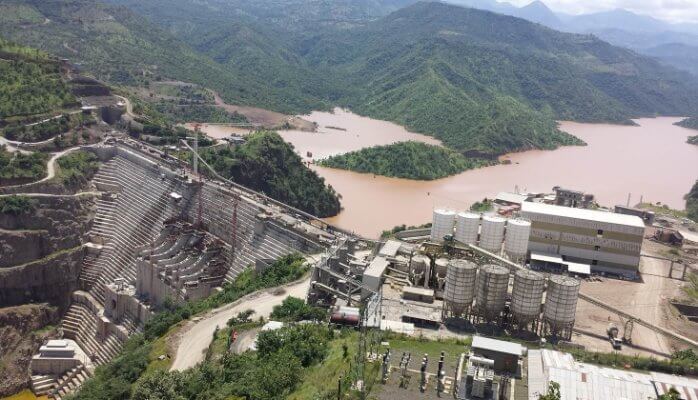 ADDIS ABABA, Ethiopia — Ethiopia on Saturday officially opened the Gibe 3 hydroelectric dam, which is among the biggest in Africa, despite concerns by environmentalists about its impact downstream and upon neighboring countries.

Ethiopia aims to produce 15,000 megawatts of electricity through its dams in the coming five years, Prime Minister Hailemariam Desalegn said at a ceremony launching the Gibe 3 dam.

Officials said Gibe 3 makes Ethiopia one of the biggest producers and consumers of renewable energy in Africa. They said the massive dam will help Ethiopia meet its own and neighboring countries’ increasing demands for cheap, renewable electricity.

The Gibe 3 dam cost $1.7 billion to build, with 40 percent of that covered by the Ethiopian government while the remaining 60 percent was obtained through a loan from the Chinese government, officials said.

Gibe 3 is part of the Ethiopian government’s efforts to build a series of dams on the Omo River, which runs into Lake Turkana in Kenya. Environmentalists say the dams could lead to livelihood losses and increased local conflicts.
Ethiopia has abundant rainfall in the parts of the country that supply the dams with water to produce hydroelectricity. It is also now building the Grand Ethiopian Renaissance Dam, which has the capacity to produce more than 6,000 megawatts of electricity and will be Africa’s biggest hydroelectric plant.

A year ago, the country completed Africa’s newest light railway transit system, which connects the four parts of Addis Ababa. Another railway system is being built across the country by a Turkish company as Ethiopia aspires to connect to more of its neighbors by rail.
Copyright 2016 The Associated Press. All rights reserved. This material may not be published, broadcast, rewritten or redistributed.