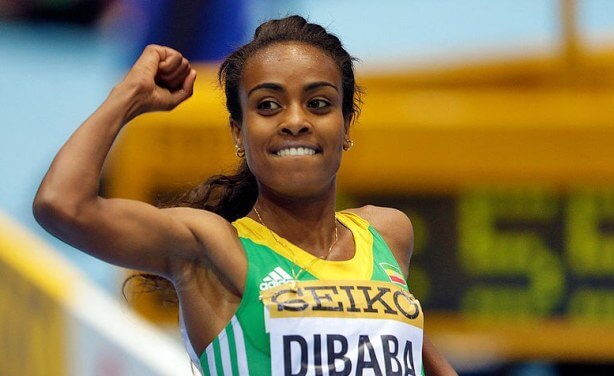 The joy of Genzebe at the finishing line

Genzebe Dibaba won the race leaving the second place for Kenyan Faith Kipyegon and the Netherlands athlete of Ethiopian origin Sifan Hassan third. Genzebe ran a last 800 m of 1:57.2 in the 1,500 m for the Ethiopian’s first global title.

Genzebe, whose elder sister Tirunesh is a multiple world champion, won in 4:08.09, and the 24-year-old looks good to add more medals of her own after dictating the final like a veteran.

She said: “I worked very hard for the last three years. It’s great to have such a strong performance. My sister won the gold medal in this stadium at the Olympic Games so I wanted to share this family experience.”

Kenya’s former world junior champion Faith Kipyegon was the only runner to stay with Genzebe over the last 400 and took silver in 4.08.96.

Kipyegon said: “Genzebe is just too fast in the finish. I wanted to keep up with her but she is the real winner. She is also my idol and my friend. With her in the final the silver has a taste of gold to me.”

The Ethiopian-born Sifan Hassan took bronze for the Netherlands in 4.09.34 but was not happy.

She said: “It was not the race I wanted to run. I completely messed up my tactics, I was hoping for a faster pace. I am so upset about that, I have to come back again and try for more.”

Laura Muir’s bid for the first major medal of her career ended in disappointment when she came home fifth. The Scot left herself too much to do and was never in contention, despite finishing strongly, crossing the line in 4:11.48.